Getting Fresh with My Pumpkin Pie (It’s Gluten-Free and Milk-Free Too!) 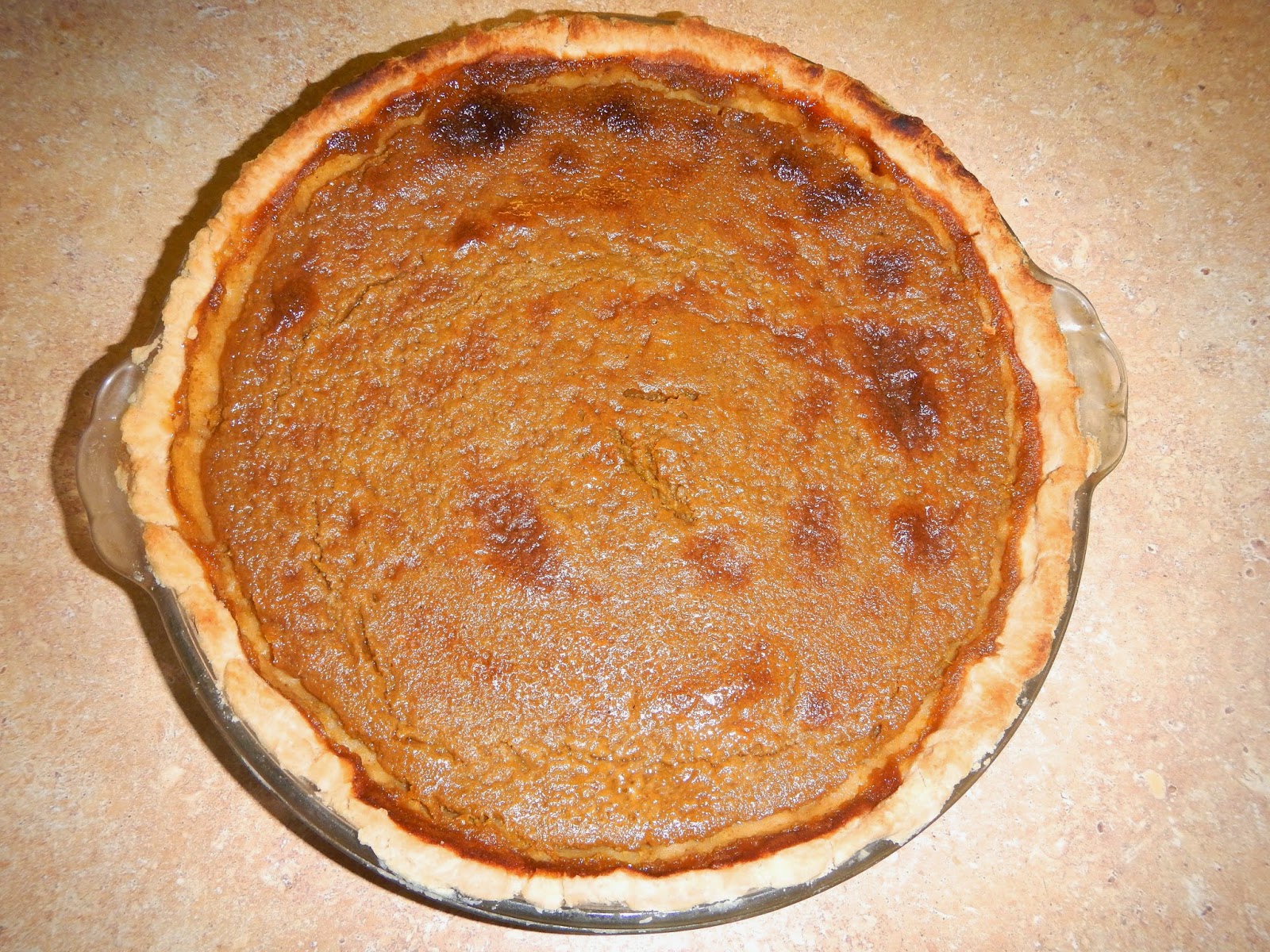 Due to holiday season craziness (you can relate, can’t you?), it has been about a month since I wrote my last Day by Day Homesteading post.  During that time, I found myself frantically preparing for Christmas, traveling to visit family in two different states, working a full-time job, baking and fermenting, and making homemade herbal remedies to give as gifts.

While I really do enjoy the holiday season, I admit that I probably overdid it on the activities, and I likely did not get as much sleep as I needed.   I eventually found myself to be ill, likely with the flu, not once, but twice within the two weeks right before Christmas.  Fortunately, I was feeling better by the time Christmas Eve rolled around, and things were looking much brighter and much more festive for my health by then.

Ever since the holidays have ended, I have been laying low and have continued to take a short break from writing posts.  I am now finally feeling like things are starting to get back to a fairly normal (and not so insane) schedule.  I have started fermenting things again (I took a break due to all of the holiday busyness and traveling) and I will really enjoy my finished kombucha and gluten-free sourdough bread when they are ready.  I promise that I will write all about making gluten-free sourdough bread in a future post, so never fear, Dear Reader, if that is a subject that you are interested in.

Amongst the busyness of the 2014 holiday season, I made a huge discovery for my gluten-free and mostly milk-free (except for butter, which I can tolerate) world: homemade gluten-free pumpkin pie made with coconut milk instead of sweetened condensed milk, and pumpkin puree made from fresh sugar pie pumpkins that I grew in my own garden.

Mind you, I made this same yummy dessert before using canned pumpkin, and it was pretty tasty.  However, upon making two pies using a pumpkin from my garden, I have to tell you that this pumpkin pie is in a class all of its own!  I can say that it was probably the best pumpkin pie that I have ever eaten in my entire life.

My husband, the non-food-allergy-guy, even loves this pie, so you know it has to be tasty.  He has made me promise that I will continue to grow the pie pumpkins in our garden from now on just to make this pumpkin pie.  I have to agree that once you “think outside the can” and have pumpkin pie made from fresh pie pumpkins, you’ll never want to go back to using canned pumpkin again!

Granted, making pumpkin pie this way does require some extra work, and perhaps this method is primarily for the hardy and the determined, but believe me when I say that the extra work required will be well worth it when you take your first bite of some of the most delicious pumpkin pie on the face of the earth!

The Basics
First things first.  You need to use a pie pumpkin variety or another type of sweet variety of pumpkin in order to make pie.   The variety that I grew was an heirloom variety called “Sugar Pie Pumpkin.” They are much smaller (generally growing to a size of 6-7” in diameter), and I believe, much sweeter than your typical Jack-o-Lantern type of pumpkin varieties.

During the 2014 gardening season, I grew a total of nine sugar pie pumpkins from two pumpkin plants in my modest sized garden.  The plants took a little while to get growing, but once they got started, they really did well and darned near almost took over my entire garden.  I had to secure the vines to the outside of my garden fence just to keep them from being the “Pumpkins that Ate my Garden and My Backyard Too.”

The pie pumpkins were probably one of the most fun plants that I have grown so far in my short two-season gardening career.  The bees really loved the pumpkin flowers too!

My homegrown pumpkins are still keeping pretty well in the cooler temperatures of my basement, having harvested them around September.  That’s a good thing, since I’m dreaming of eating more of this pie once I have some time to make it.  I was able to make two pumpkin pies from one fairly large pie pumpkin, but depending upon the size of the pumpkin that you are using, you may need to add a little bit of canned pumpkin as a backup if you don’t have quite enough fresh pumpkin.

Another thing that I noticed when making pumpkin pies using this method is that it took longer than usual for the pumpkin pie filling to bake all of the way through, perhaps due to a higher moisture content in the puree made from fresh pumpkin.  Either way, I would try baking your pie(s) for the suggested length of time in whatever recipe that you happen to be using, and then continue to check your pie as it bakes about every five minutes or so to see if it is done.

Making the Pumpkin Puree from a Fresh Pumpkin
This may indeed seem quite intimidating at first.  After all, it is likely that the majority of folks reading this post have never made pumpkin puree in their lives.  This was certainly the case for me, but if I can make puree from a fresh pumpkin, I know that you can too!

After doing a little bit of internet research on this process, the basic idea seemed relatively simple:  cut up and peel your pumpkin into chunks, boil the pumpkin chunks in water on your stovetop, drain, and then puree the pumpkin.  Sounds simple, right?

In practice, the process for me turned out to be a little more involved, however:
1.  Cut up your pumpkin into larger sections.
2.  Scoop out all of stringy pulp in the middle, along with the seeds (which I later separated, saved and dried to be planted next year, shared with fellow gardener friends, and hopefully some to be roasted and salted for a tasty treat).
3.  Peel off the outside skin of the pumpkin using a knife (a vegetable peeler would work well too), and cut the remaining pumpkin flesh into smaller cubes.  Good sized cubes for this purpose are probably about 4-5 inches wide.
4.  Place pumpkin chunks into a large pot, fill the pot with enough water to cover the pumpkin by a couple of inches, and bring the water to a boil.
5.  Once the water is boiling, cook the pumpkin until the chunks are soft when pricked with a fork.
6.  Strain the water from the cooked pumpkin and place them into a large bowl.
7.  Using an electric hand mixer (or a high tech blender), or a hand held potato masher, mix until the pumpkin turns into a smooth puree.
8.  Add all of your ingredients and spices to make your pumpkin pie filling and proceed to using your favorite pumpkin pie recipe from there.   My preferred sweetener to use for baking is sucanat, as it still contains all of the minerals that natural sugarcane has, and it gives whatever I am baking a depth of flavor without being overly sweet.

I personally choose to avoid using white sugar in my baking, as it has been stripped of all of its minerals and exerts a very imbalancing effect on the body.  If you have blood sugar difficulties such as with Diabetes, you may wish to do some research to determine whether or not sucanat is right for you, and perhaps choose a different sweetener that will best meet your personal needs.

How to Make Your Pie (Lactose-Free and Gluten-Free!)
If you have to avoid most milk products like I do, or if you would like to explore a healthy, and extremely tasty alternative, then you will love this pumpkin pie recipe from PieChef.com, which calls for using full-fat canned coconut milk in place of the typical sweetened condensed milk.  You would never know that it contains coconut milk, and even your more traditional non-food-allergy pie eaters will still probably love it.

And, what is my favorite way to enjoy this pie?  With creamy, dreamy, and dairy-free vanilla coconut milk ice cream, of course!

Thus far, my gluten-free pumpkin pie baking experience has consisted of using a mix to make the gluten-free crust, but I am hoping to try my hand at making my own from scratch in the future.  This would probably make a good "night or day before" type of project so that you’re not overwhelmed and have one less thing to do when you make the rest of the pie from scratch.

I would encourage you to give this process a try, especially if you grow your own pumpkins in your garden.  Your taste buds and your family and friends will thank you!

And for those of you who haven’t seen what my pumpkins looked like growing in their natural habitat in my garden, here is a peek at what they looked like: