My Pumpkin Growing Saga So Far 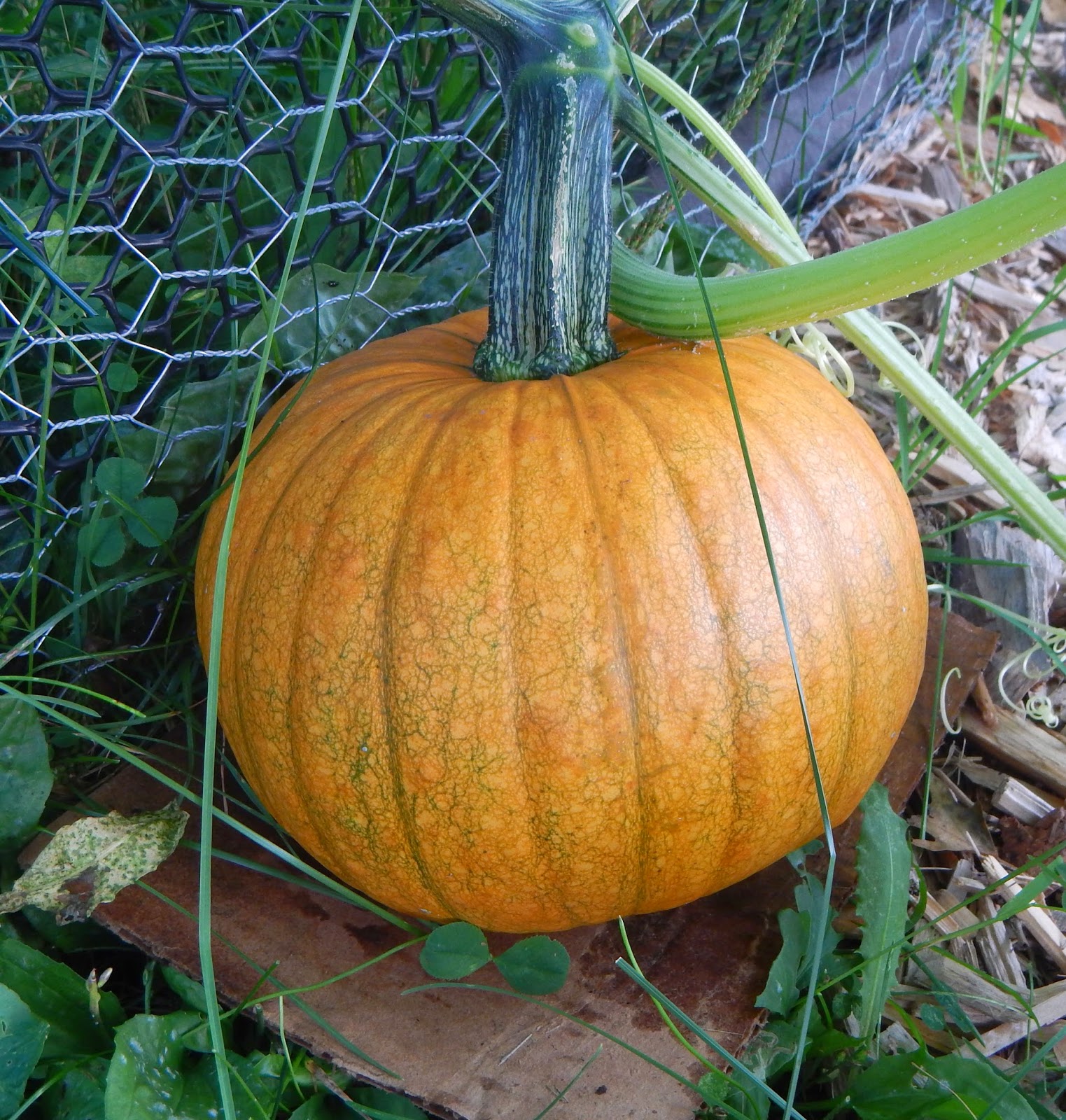 Dear Readers, the pumpkins in my garden are growing like crazy!  Visions of gluten-free pumpkin pie and other tasty goodies are dancing in my head…

A few months ago, I planted some Sugar Pie Pumpkin seeds (Curcubita pepo) in the mulched soil of my garden and eagerly awaited the first signs of life to spring forth.  At the start, the plants seemed humble and unassuming as they sprouted from the ground, slowly at first.  Then before I knew it, the pumpkin vines began to grow rather aggressively and travel all over the place, as if they had a mind and a personality all their own.  There were even moments when I discovered a few pumpkin vine tendrils wrapped around other unsuspecting plants or structures, all seemingly within a single day (I swear to you that the plants in our gardens do crazy things when we’re not watching them J…).

In an effort to “use the problem as the solution” as we say in permaculture, I began to direct the vines, tying them to the exterior of the fence around my garden.  This was an effort to give the vines a place to go, as well as to hopefully provide at least a rudimentary deterrent to the squirrels that have proven to be a menace in my garden this season.

While the prickly pumpkin vines have seemed to deter the squirrels at least a little, a few of the varmints have still gotten into the garden despite my efforts.  Thankfully, although they have continued to dig into the mulch from time to time, they have largely left the rest of my mature vegetable plants alone.

I recently came across a pumpkin-growing tip that recommends keeping your pumpkins directly off of the ground as they grow.  According to my research, the moist ground can potentially cause pumpkins to rot, so to prevent this, you can place materials like cardboard beneath them.  I’m unsure why using materials such as cardboard as a barrier is preferable to simply allowing the pumpkins to lay directly on the ground, since they can both become wet after a rain, but I decided to use the cardboard method.  So far, it seems to be working sufficiently, with my pumpkins thus far remaining safe and sound.

Pumpkins have admittedly been fun to grow, despite the vigorously growing vines that seem to take over wherever they grow.  For about a month now, I have been watching my “oldest” pumpkin grow ever larger on a daily basis.  Then one day about a week ago, it stopped growing and started turning orange.  Now I must wait a little while longer until it is fully ripe for the harvesting.

You never truly appreciate what it takes to grow something until you grow it yourself.  Once you grow something for the first time, you treasure and savor it because you have put forth your own resources, efforts and energy.  In the era of cheap and widely abundant food that we have been living in the U.S. for quite some time now, we have become ever disconnected from what it takes to grow our food, and we don’t appreciate these processes for the miracles of nature that they truly are.  In the coming age of natural resource scarcity and limitations that we seem to be entering, it is likely that many of us will once again discover these food cultivation processes that our ancestors knew so intimately.  We may as well have fun while we’re learning.

One of the best things about this process of growing food is that we can literally taste the results of what we have worked so hard to produce.  My very first gluten-free pie made from pumpkins that I grew myself instead of pumpkins from a can will serve as my sweet reward.
Posted by Rebecca at 6:55 PM