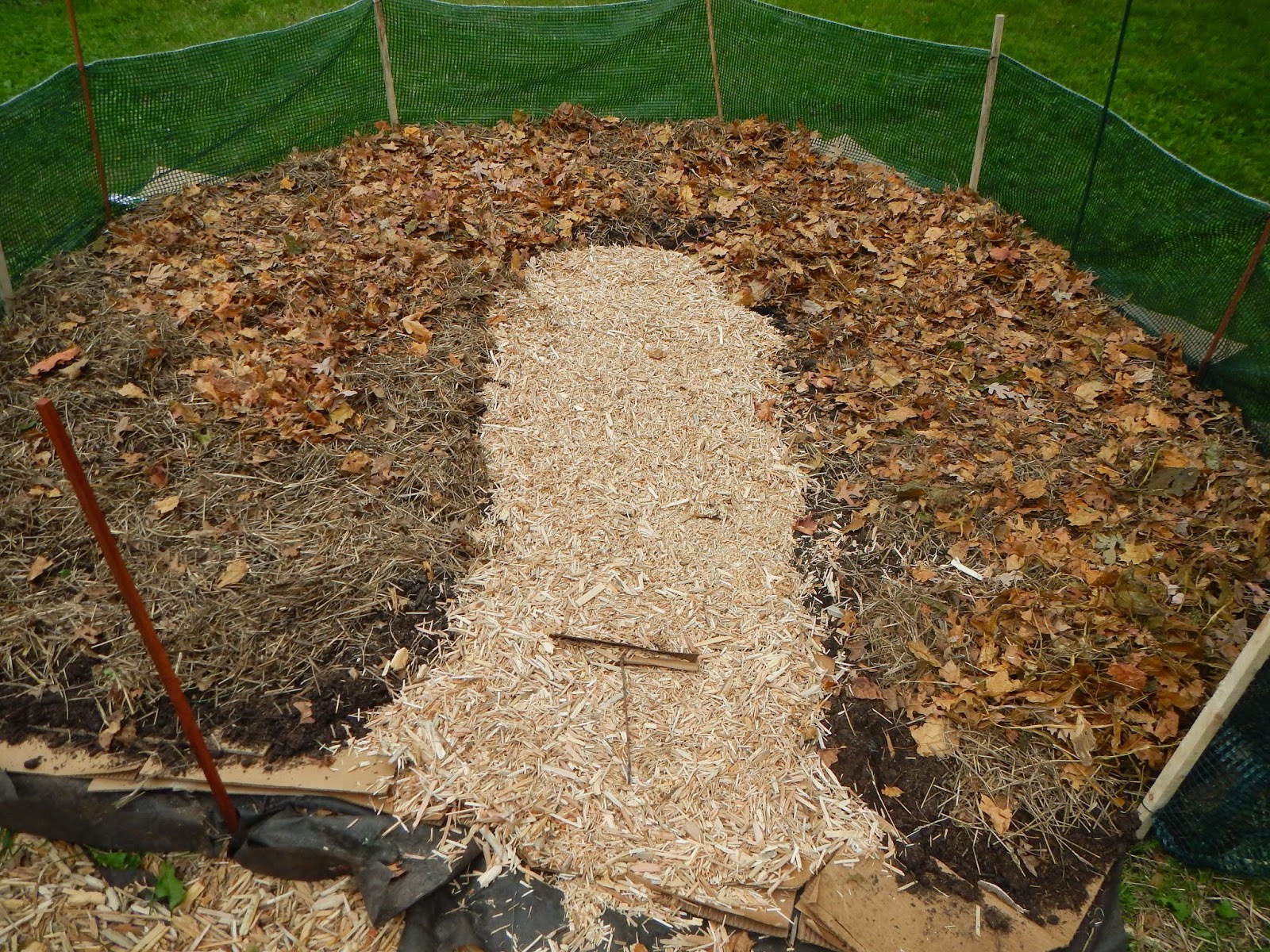 Well I really have to admit it.  I missed blogging.  Blogging is a creative outlet for me, and I was unable to dedicate time to it while I was working on getting my first e-books self-published.  Now that the book project has been completed, I can start writing about my garden adventures again.

A lot has happened in my garden since I wrote about spring in my last garden post.  For starters, I prepped and planted the garden bed in the existing garden area where I had my straw bale garden last year.  For site prep on top of the existing composted down straw bales that I spread out last fall, I mixed in some compost from our local county yard waste site, and I sprinkled some used coffee grounds as amendments.  I figured that other than that, there was probably still a lot of great organic matter remaining from the composting straw bales, so I’d just go ahead and plant directly in it.

After site prep in my original garden area, I put two keyhole paths into the garden area with woodchips and wood mulch so that I could easily reach into the garden area from the inside.  The keyhole paths allow for easy reach and access from within the garden, and I can also easily reach the rest of the plants from the outside of the garden by reaching over the fence that I have rigged up to keep rabbits and at least provide a little deterrent to squirrels (although I’m not sure how well that it actually working- doesn’t hurt to try, right?).  I then planted many of the starter plants that I had started from seed earlier this spring.

I openly admit that I’m probably quite over-ambitious trying to grow so much in such a small space, and I’ll probably run out of room, but heck, why not try stuff?  The plant selection includes: watermelon, cantaloupe, the Three Sisters (with sweet corn, red kidney beans, and pumpkins), broccoli, sweet peppers, sugar snap peas, picklebush cucumbers, tomatoes, kale, and more.  I’m also trying some companion planting using various herbs as pest deterrents, so I’ve planted onion bulbs along the perimeter, as well as some marigolds and calendula, and some basil by the tomatoes.  We’ll see how everything grows.  I love to experiment and learn, so it will be interesting to see what does well.

I also planted some herbs in my herb spiral after adding some of the compost and the used coffee grounds, as well as adding some sticks that have fallen from our very large oak tree in our backyard and some dried oak leaves for bulk and retaining moisture (they were added prior to adding the compost and coffee grounds).  So far, the plants in the spiral seem to be doing okay, and the cilantro seeds that I planted seem to be taking off pretty well.  I also transplanted two strawberry plants that I had covered with straw over the winter in the main garden area.  It amazes me that anything can survive in such cold winter temperatures that we can get here, but they did make it, and they actually have a few green strawberries on them so far.

The one issue that I have had so far with my herb spiral this year has been the squirrels.  They decimated my small oregano transplants that I had started earlier this spring and planted in the spiral.  This has puzzled me a bit, since the squirrels left my oregano plants in the spiral alone last year.  My thoughts were that either the smaller starter plants didn’t have enough of the essential oils in the plants yet to serve as a deterrent and it was just a tasty salad item for the squirrels, or the buggers were making some sort of Italian or Greek potluck item to share with their families.  If any of you reading this have any ideas, I’d love to hear them.

Then, there is the new garden addition to my yard.  I wanted more planting space than what I had available last year, so I decided to put in a keyhole style garden bed next to my whiskey barrel planter that I have some lettuce planted in, and do the site prep using a sheet mulch technique.  You see, I am all about working smarter, not harder when it comes to gardening, so the sheet mulch technique provides a lot of advantages when it comes to setting up a new garden bed in short order without having to do a lot of work.

There are a number of ways to approach the sheet mulch technique, but for my new garden bed, I chose to follow the example given in the book Permaculture in a Nutshell by Patrick Whitefield.  Basically, you begin by laying down cardboard over the initial area that you are going to build the bed on.  This blocks grass and weeds from growing by excluding light and provides an initial carbon layer for the bed.  The cardboard layer should have no gaps so that weeds cannot grow up between the cardboard pieces and into your garden.  Then, you lay down a 5-10 cm layer of nitrogen-rich material, such as composted manure (which is what I did), and lastly, you lay down a dressing layer on top (about 20 cm) of carbon-rich mulch, such as straw (do not use hay, it has seeds) and dried leaves.  This upper layer will help to retain moisture and provide additional carbon-rich material that your garden bed needs.  As with regular composting, you need both nitrogen-rich and carbon-rich materials to break down into the ideal organic matter for your garden.  Make sure that all of the layers are wetted down well as you are laying them out to kick-start the composting process.

After this prep process (and sprinkling some used coffee grounds over the new garden area), I put the keyhole path in the middle, spread out wood mulch on the path, and then I put fencing around the entire garden area to keep little critters out.  Lastly, I planted a number of transplants that I started from seed directly into the new bed, and will be planting some seeds in the remaining space left in the keyhole bed garden over the next couple of days.  A few tips:  You will probably want to punch a hole in the cardboard layer just prior to planting so that roots can get through to the ground below.  You will also want to put some potting soil in the hole to plant the transplants in or just plant your seeds in the potting soil as well.  Make sure that you water everything well after planting, just as with any other garden plantings.

Here are a few pictures of the process of my garden prep so far:


This post is shared at Healthy, Happy, Green & Natural Party Hop
Posted by Rebecca at 12:09 PM