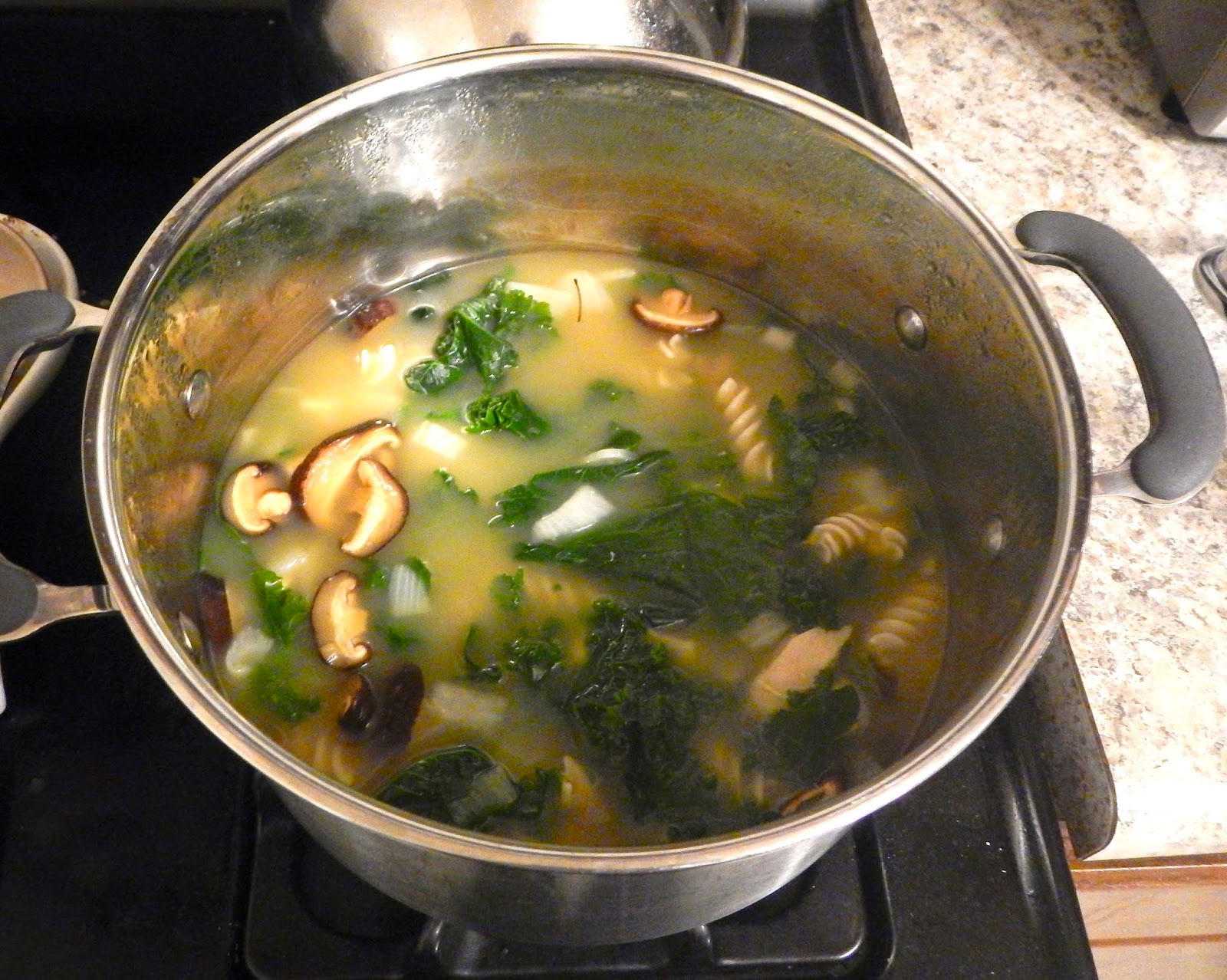 My Dear Readers, I have been battling what I believe to be the flu over the last several days.  Thankfully, I have been taking my handy homemade elderberry-echinacea syrup that I made about a month or so ago, as well as temporarily increasing my vitamin D supplementation, taking extra vitamin C and taking some of my homemade holy basil tincture to support my body’s immune system.

As most of you can probably relate, when you are sick, you don’t necessarily feel like eating much.  What I did want to eat a couple of nights ago was soup, however.  Nourishing… Tasty… Soup!   Not so unusual right?  Well, in our case, we had no soup in the house at the time, so I sent my husband to the grocery store to seek out a very specific brand of soup that is not only gluten-free, but also, as far as I can tell, does not contain many of the icky additives and preservatives that most commercial soups contain, such as MSG and yeast extract (which, from what I have read, is also not very good for you).  Unfortunately, some of these additives like yeast extract can be found in many of the “organic” soup and broth brands on the market.  Much to my disappointment, this particular store did not have the kind of soup that I knew and trusted, despite carrying this particular product in the past.  Strike #1…

Next, my husband proceeded to go to a second grocery store looking for this soup and purchased several cans of a different “organic” brand of soup and brought them home because he could not find the brand that we were looking for.  Sadly, upon examining the ingredient labels, this soup did contain yeast extract, and I decided that, even this soup was not fit for human consumption.  Strike #2…  The grocery store will be receiving these “gifts” back, and we, in return, will be blessed by receiving our money back.

My husband felt defeated in this “Incident of the Sorry Soup,” but I told him that it certainly is not his fault that the majority of the food companies in the United States put such crazy ingredients in processed foods in the name of “flavor.”  In his defense, he is not as used to braving the jungle of processed foods in the grocery stores as I am, and most of the time he doesn’t need to worry about translating the food label ingredients into plain English.  It really is like learning another language while seeking something to eat in the processed food jungle that won’t adversely affect your health somehow…

I am not only the cook in my family, but I am also the primary grocery shopper, the gardener, and the resident nutrition and health guru.  You could say that food and what we eat is my territory in our family.  I have a passion for great tasting and whole, nourishing foods.  Foods that actually resemble what our grandparents, great grandparents, and past generations ate and actually recognized as food.  Most things on the average grocery store shelf today have little resemblance to real food.

Most of the foods that my family eats are not processed foods, and I prefer to make most of our meals from scratch, and from whole foods.  There does happen on occasion sometimes, however, when the chef is “out,” as I was the other night being ill, or life just plain gets to be too busy.  Then, I just do the best that I can and try to find the most natural and organic food possible given the circumstances.  I live in the real world just like you do :).

In this case, the plan of getting the preferred commercial soup failed, and I had to come up with something, and yes, I still wanted soup!  “Well,” I thought, “I’ll just have to make my own homemade soup tonight…”

In reality, I have actually sworn off of buying most commercial soups and generally make my own at home 99.9% of the time because:

1.)  I have gluten and milk allergies, which reduces most commercial soup options that exist on the face of the Earth.
2.) Even most of those commercial soups that happen to be gluten-free and milk-free tend to have one or more ingredients that human beings should never ingest, or they just taste terrible.
3.)  Homemade soups generally just taste better and are more nutritious anyway.  You can also add (or exclude) whatever ingredients that you want.  This is a win-win scenario!

There is also the realization that, like so many other foods in our modern diets, we have just gotten used to eating the pre-made stuff and don’t even consider that we could make such things ourselves at home.  They could turn out to be even better than just about anything from the store anyway.  And many of these homemade creations really do not require that much work to make if you already have the ingredients on hand.

So here is what I did to make my own homemade soup.  I had no recipe, just inspiration, miscellaneous ingredients in my kitchen, and an intense desire to eat nourishing soup because I was ill.  I assure you that you too can easily do the same yourself, or make your own version of it.  In my opinion, cooking in many cases is more of an art form than an exact science, and you actually have a lot of room to play around with.  Gluten-free baking, on the other hand, is another story.  It needs many more exact ratios of dry to wet ingredients that are involved.  That is another story for another day, my friends…

1.)  I used two quarts of pre-made gluten-free, organic, and appearing to be healthier, chicken stock from the grocery store that I had on hand (a great case for why it’s so great to always have some stock or broth in your kitchen.  You never know when you might need some!).  Obviously, homemade stock or broth is way better than the store bought kind, and it’s always great to have some of the homemade kind on hand in your freezer as well just in case.
Vegetarians/Vegans: I am confident that vegetable stock or broth should work fine as well, if you prefer.
2.)  Separately, I took a couple of chicken breasts from my freezer (optional), filled up a pot with water, and boiled the chicken until it was cooked thoroughly.  I do this from time to time if I need some cooked chicken in a hurry.  After the chicken was thoroughly cooked, I took it out of the water, chopped it up and reserved it for later.
3.)  I chopped up a small onion, as well as some kale and parsley that I had harvested from my garden earlier in the week and already had sitting in my refrigerator.  I estimate that this amounted to about two to two and a half large kale leaves and about 1/4 -1/2 cup of parsley for those of you taking notes, but trust me, this all about improvisation and what you already have available in your kitchen.  I had originally intended to use these greens in my fruit and veggie smoothies earlier in the week.  However,  I never got around to making them, and therefore, they dedicated their lives to my soup.
4.)  I had some dried shiitake mushrooms in my cupboard.  These and other types of edible mushrooms are also great staples to have on hand, since they are so good for you.  Among the many nutritional benefits of mushrooms, they are a good source of protein, vitamin D2, and contain a special class of immune supporting carbohydrates called polysaccharides.
5.)  I also had some uncooked gluten-free pasta on hand and added that as well.
6.)  The basic process:  I heated up the stock, added a few cups of water (again, not an exact science here) and added my chopped onions, kale, parsley, mushrooms, chicken, and gluten-free pasta.  I added some sea salt and pepper, and heated everything up until it was boiling for several minutes, and ensured that the greens, mushrooms, and the onions were cooked.

It was very delicious soup!

There are a plethora of variations of this basic process, and an almost endless number of things that you could add to basic broth or stock to make soup.  I have made variations of this soup using frozen or fresh vegetables, adding both dried and fresh herbs, cooked rice or other grains or pasta, onions, and garlic.  You could even add prepared beans or legumes if you wish  The sky is the limit, really, but have fun, be creative and nourish yourself.

Tip: Consider adding some super herbs and superfoods like astragalus powder or keep powder (or other seaweed) to your soup for even greater nutritional value.
Posted by Rebecca at 4:22 PM