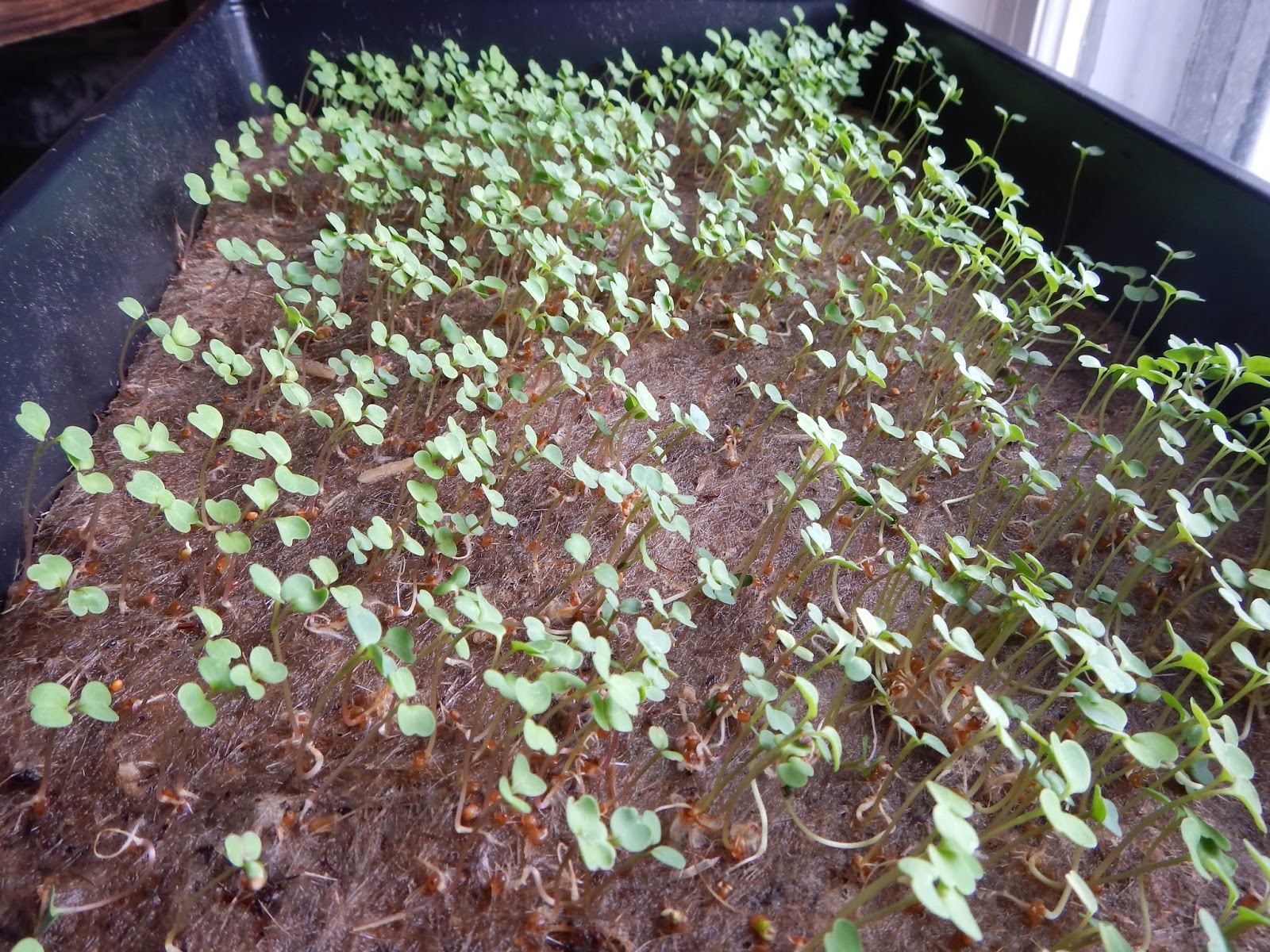 Last fall, I was shopping at one of my local garden centers, and was thrilled to discover that their end of growing season clearance sale was going on.  I then proceeded to have a great time picking out a plethora of different seed packets for my garden next year.  I have heard that the germination rate of older seeds may not be as great as first year seeds, but I was excited to find so many different types of seeds at such a great price, and was willing to try growing them anyway.  In the meanwhile, I have tried to store these seeds in a relatively cool and dark place to keep them as viable as long as possible.  Here is a great article about the germination rates of older seeds and how to tell if yours are still good.

During this shopping experience, I also came upon a table with other clearance items, including some greatly price-reduced kits for growing microgreens, the seedlings of various vegetables and herbs.  Intrigued, and given that the kits were only $2.00 a piece, I purchased two of them, along with a number of additional microgreen seed packets sitting on the same table.   I brought them home, and stored them underneath a table holding the potted herbs that I am trying to keep alive throughout the winter (I’m sorry to report that my current indoor potted herb success rate is less than spectacular without a grow light, however.).

The autumn passed, as well as the recent holiday season, and soon January arrived.  I had been keeping busy with work, the busyness of the holidays, and all of the responsibilities of home upkeep, and so I forgot about my microgreens kits.  Then one day recently, I looked out of my window at the snow… I looked at my potted herbs on the table… I looked back out of my window at the frigid, white, lifeless, snow and sighed.  I missed the sunny days, the warmth of spring and the summer, and the fresh foods harvested from my garden.

I looked back at the herbs on the table, and then I noticed the microgreens kits just sitting there beneath that table, waiting for new, green life to spring forth and bring freshness to my world until spring finally arrives and it will be gardening season again!  Okay, I admit it: those of us living in the temperate North have to savor any fresh & green plant life wherever it may be found during the long and chilly winter season.  I have personally been known to lurk around botanical conservatories and in the tropical exhibits at zoos just to be around living plant life in the wintertime.  Don’t deny it, you’ve been there too.  I’ve seen you!…

So, I decided to try growing the microgreens, and that growing something green in the middle of winter would be fun.  Included in each kit were two packets of microgreens seeds (my first try has been a kit that contained arugula seeds), a special growing pad made from natural plant materials that serve as the substrate to grow the greens in, and a plastic reusable growing tray with a “biodome” cover that acts as a greenhouse to help provide the warm and moist environment for proper seed germination.

The fairly simple process required to get started using the kit is:
1.)     Wetting the germination pad
2.)     Sprinkling the seeds on the pad
3.)     Placing the tray in a sunny location
4.)     Ensuring that the germination pad remains saturated as the plants grow
5.)     Keeping the tray covered with the plastic cover until the seeds germinate

I found that I only had to water the growing pad about twice to keep it saturated with water over the course of the seven days that it took for my microgreens to grow, approximately once every three days.  Of course, if I had kept my microgreens tray in a warmer and drier spot such as near a radiator, I would probably have needed to water the growing pad more often.  By the end of the week, I had little baby arugula plants growing that should add a tasty, spicy flair to my salads, sandwiches, and soups, and provide me with some superior nutrition, such as even more vitamin C, vitamin E, and beta carotene than the mature version of these greens.

They were fresh, they were green, and they were mine at a fraction of the cost of getting them from a grocery store or restaurant.

No Kit? No Problem!
Yes, I grew my first batch of microgreens by using a kit, but you don’t need to have a kit to grow fresh and delicious microgreens yourself.  To grow microgreens, all you really need is a clear or opaque shallow plastic container such as a salad box, some cardboard, potting soil, some seeds, and a location with lots of light such as near a window or a grow light.   I am a firm believer that you can do a lot of things yourself at home without needing to purchase a lot of fancy equipment.

Almost any type of seed can be grown as microgreens, but the most tried and true varieties include arugula, beet, chard, asian greens, and some varieties of specialty greens,due to their color, appearance, and flavor.  After an average of about 7-10 days (some varieties can take as long as 14 days), the microgreens should be ready to harvest after the growth of the seedling’s first true set of leaves.  The microgreens should be cut at the soil surface above the roots (the roots should not be eaten), and then washed, allowed to dry, and store refrigerated in a plastic bag and eaten within about seven days.  You could also harvest them when you are ready to eat them.  Just don’t let them get too big or they won’t be microgreens anymore!

Aren’t Microgreens the Same as Sprouts?
I myself had some confusion concerning the difference between microgreens and sprouts, having never grown either one prior to about a week ago.  Upon doing a little bit of research, I came to find out that there are actually several very important distinctions between the two types of greens, with the primary difference being how both types are grown.

Sprouts are seeds that have been germinated in only water, and are generally harvested after about two days’ time.  They grow without sunlight, and have just grown a root, a stem, and pale underdeveloped leaves.  They require frequent rinsing to reduce opportunities for bacterial growth, which can be a potential problem with growing sprouts.  All parts of the sprout can be eaten, including the roots of the sprout.

Microgreens, on the other hand, are grown in soil or other growing medium, require sunlight (or a grow light) to grow, and take about one to two weeks to grow before they can be harvested.   The greens should be cut along the soil when harvesting, and the roots should not be eaten.  Only after the leaves are fully spread should the microgreens be harvested.  The sunlight and air circulation that the microgreens receive while growing reduce the opportunities for bacteria to proliferate, providing for a safer option than sprouts (I recommend that you do your own research on the proper techniques for growing sprouts if you would like to grow them yourself.).

Both sprouts and microgreens are quite nutritious and contain many vitamins and minerals that are great for your health.  Both are also great ways to get some fresh veggies into your diet all year round, and even if you have limited space to grow things such as in an apartment, be hopeful because you can still grow something!

Watch My Microgreens Garden Grow!
Below are pictures taken of the various growing stages of my microgreens.  I love to learn and document the processes of living things, so this was fun to watch as the little baby plants germinated and grew from seeds.  The next time that I grow a batch of microgreens, I will grow them much more densely to get a greater volume of greens growing at a time.