How to Make Kombucha

One of my favorite homesteading activities so far is making kombucha, a lacto-fermented beverage.   I had already been making and eating homemade sauerkraut for a couple of years when I learned about kombucha.  Intrigued by this brew and the health claims of detoxification and an immune system boost, I decided to buy some commercially-made kombucha at my local health food store, and found that I really liked it.  Not only did I really like the sour taste, but I noticed a slight increase in my sense of well-being after drinking it.

I began to purchase a bottle or two as a weekly treat and soon realized, like so many other kombucha drinkers, that $3-4/bottle was going to add up rather quickly.  So, I decided that once I had a chance to get a kombucha starter culture, called a kombucha "mother" or a SCOBY (Symbiotic Culture of Bacteria and Yeast), I would start brewing my own at home for a lot less money.

The traditional way to obtain a SCOBY is to get one from a friend who makes kombucha at home, since a new "baby" SCOBY is produced each time you make a batch.  However, since I didn't know anyone in my area who makes kombucha, I found and purchased a SCOBY from an online vendor.  It's very important to get a quality and viable culture, so if you do order one online, I recommend doing some research and checking out product reviews before you buy it.  I purchased my original SCOBY for about $10, so it was a fairly inexpensive investment that has more than paid for itself in the several batches of kombucha that I have already made over the last few months.

Brewing kombucha is generally a 7-10 day process, but may take longer if the room temperature that you are fermenting in is cooler (less than about 70 degrees Fahrenheit).  This is because the cultures will not be as active in cooler temperatures as in warmer temperatures.

Taste will be your guide as to when the fermentation process is finished.  The brew should have a vinegar-like sharpness, the sweetness of the sugar should have decreased significantly, and the taste of the tea should no longer be evident.  After the initial fermentation period, you may choose to ferment further for another 5-7 days in glass bottles at room temperature, which will naturally carbonate it and make it bubbly, similar to the fizziness in a soda pop.

The ingredients needed to make kombucha are few, similar to most other fermented foods and beverages.  With only some tea, water, sugar and your SCOBY culture, you'll soon be brewing kombucha with the best of them.  As is usually the case, the higher the quality of ingredients that you use, the better.  Non-chorinated filtered water is generally recommended, as such chemicals can kill or adversely affect the SCOBY.  I have also used spring water quite successfully to ferment kombucha.  Organic black and green tea is best, since non-organic teas can have large amounts of fluoride, which can be harmful to your health.

It is generally recommended that you use organic white cane sugar, but I have used non-white organic sugar and it still produces a good brew.  According to Sally Fallon in her book Nourishing Traditions, white sugar, rather than honey or other non-processed sugar such as Rapadura or Sucanat, results in the greatest amounts of glucuronic acid, which is one of the healthful properties of kombucha that supports the immune system and bodily detoxification.

I make my kombucha a batch at a time, but someday I hope to start using a continuous brewing method, where I will always have kombucha on hand.


Kombucha
Makes a little less than one gallon of kombucha 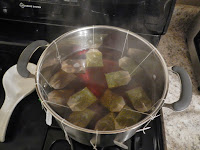 1.  Boil the 3 quarts of filtered water, remove from heat, add the tea bags and steep for about 10 minutes.  Remove the loose tea or tea bags and press the tea to extract any extra tea "juices." 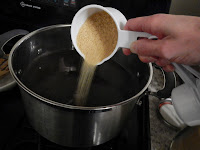 2.  Add the sugar and stir until all of it is dissolved.

3.  Let the sweet tea cool until it is close to room temperature and is no longer hot.

4.  Poor the cooled tea solution into a clean gallon size glass jar, add the pre-made kombucha liquid, stir to mix and with clean hands, gently place the SCOBY into the jar.  You may add some additional unheated filtered water at this point to increase the total volume of your brew, but be sure to leave about an inch or so of space below the neck of the jar.  Stir to mix.  Be gentle with your SCOBY if you happen to stir when it is present in the jar.

5.  Wipe down the outside of the jar to discourage any insects such as fruit flies from having a party in your brew. 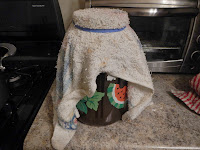 6.  Cover the jar with a clean towel, and secure with a rubber band.


7.  Place the jar in a warm, dark place, away from any contaminants.  If you don't have an  appropriate dark place to let the fermenting kombucha hang out, you can wrap clean dark  colored kitchen towels around the jar and  secure in place to help keep it in the dark  ( I use twist ties).   Be sure to leave the bottom of the jar unwrapped to allow the jar to sit level on a flat surface.  Also, be careful when transporting your cozy kombucha from one spot to another to avoid dropping it.

I lift up the towels before carrying it with both hands to it's final "fermentation destination," so I'm less likely to drop it.

8.  Let the kombucha ferment for about 7 days, and then taste it.   It should taste sour, resembling vinegar, with the sweetness having decreased dramatically, and no tea taste should remain.  If the kombucha still tastes fairly sweet, continue to let it ferment and check daily until ready.  Initial fermentation can take as long as 14-21 days, if the room temperature is relatively cool.


Your kombucha mother should have grown a new baby SCOBY during the fermentation process that you can use to either ferment a new batch with or to give one to a friend.  A single kombucha mother can be used to ferment dozens of batches, so you will have plenty of baby SCOBYs to share.


9.  With clean hands, remove the SCOBY(s), and use one to start a new batch of kombucha, or store in a SCOBY "hotel" (a glass jar containing one or more SCOBYs and enough brewed kombucha to use as a starter for your next batch, which you can keep in your refrigerator until you are ready to brew more).


10.  If you wish to drink the kombucha as is, you can pour it into clean glass bottles or jars and store them in your refrigerator.  Pour the kombucha through a nylon or plastic strainer before bottling to remove larger kombucha strands and spent yeast cells.

You may wish to let your kombucha-filled bottles ferment (put caps/lids on tightly) for an additional 5-7 days to enhance carbonation, and to give your kombucha some fizziness.  After this secondary fermentation, the kombucha's sharp acidity should have mellowed a bit.  Be sure to leave several inches between the top level of the kombucha and the top of the bottle during the secondary fermentation phase to allow for the expansion of carbon dioxide gas and the build up of pressure within the bottles.

When the second fermentation phase is done, you can enjoy it right away or store the bottles of kombucha in your refrigerator.   When you are ready to drink the kombucha, open the bottles slowly, possibly over a sink in case there has been a lot of carbonation built up within the bottle and your kombucha overflows when you open it.


Note:  If the kombucha mother develops any black or moldy-looking spots, it has become contaminated and should be thrown away or composted, along with any potentially contaminated kombucha.  If you have your SCOBY hotel in the refrigerator, you should have plenty of starter cultures to use as a backup.

The sugar gets "eaten up" by the culture during the fermentation process, so do not worry about consuming all of that sugar.  I have also read that the caffeine in the tea gets reduced during the kombucha fermentation process as well, so for those of us who tend to be sensitive to the caffeine in things such as coffee, it is much easier on the body.  I don't drink coffee or regular tea because of the high amounts of caffeine that are so stimulating to my system, and I've never had any such issues when I drink kombucha.

Kombucha is a very healthy, but also a very potent detoxifying beverage.  I recommend trying a small amount of kombucha at first to see how your body tolerates it, and then increasing the amount that you consume over time.  If you have a strong reaction to the kombucha, your body may be fairly toxic and you may need to detoxify a bit before trying it again.  Eventually, you may be able to drink larger amounts when your body is ready for it.  Be patient and gentle with your body, and listen to what it is trying to tell you about the state of your health.  Our bodies have a lot of innate wisdom, if we are willing to pay attention.